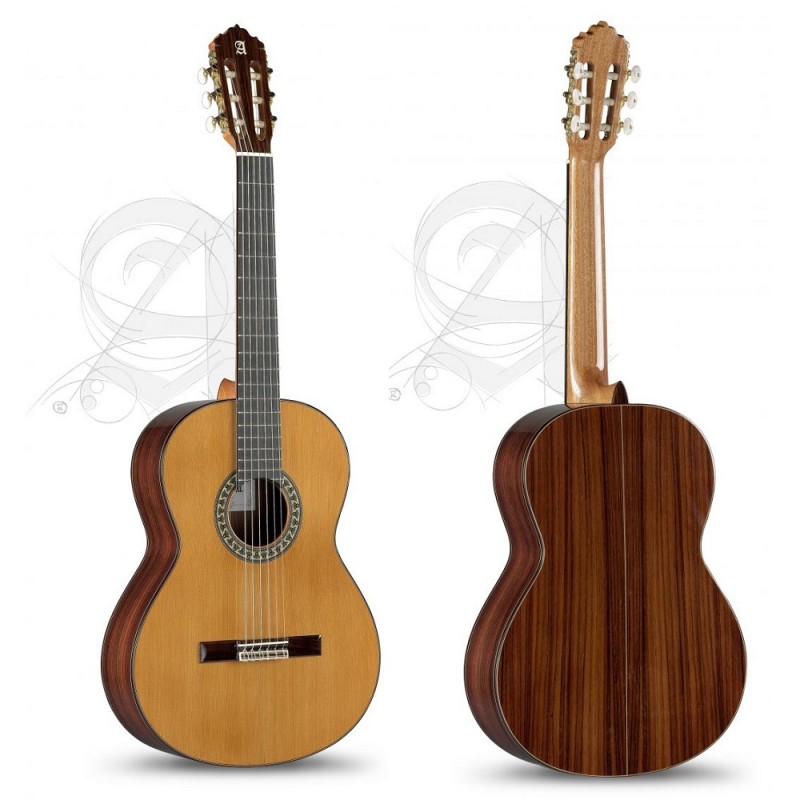 This product is no longer in stock

The guitar sized 7/8 include the Alhambra original 10 mm gigbag in their price. The 4/4 guitar does not include the gigbag.

The5P model by Alhambra Guitars is a step forward from the 4P model. The body is stronger and some characteristics are kept, such as the four varnish layers, the ebony fingerboard, the tuning pegs of superior quality and the use of a beautiful palosanto of India for the rims and bottom. Thos characteristics make the 5P model a very adequate guitar for a lot of musical styles, comfortable, with a good sound and response.

To elaborate the body of the 5P model which, along with the top is what influences the most to the sound of the guitar, it has been used a system of internal rots which consists of a thin wood supported by seven bars, two of them on the inferior part.

This building detail contributes to achieve a more robust instrument, but at the same time light, as well as improving the sound, with more consistency, warmth and richness.

Regarding the "bones", the bridge and the nut are made of melamine, a highly sound transmissor material.

The guitar has a sound that could be described as more defined, melodious with a constant tone in the whole neck. It is an example of that the sound quality of the first three strings on the 12th fret.

This instrument has several size options, as well as the possibility to be built for left-handed.

The 5P model of Alhambra guitars is an instrument with very interesting features and part of the "Conservatoire range", an equilibrated instrument with qualities to play several musical styles.

A guitar with a careful design and elaboration, specially on the string action, to achieve a very comfortable instrument, but with a sweet and strong sound at the same time.

30 other products in the same category: